You are here: Home › History & More › What’s the Purpose of Step Sparring in Taekwon-Do? 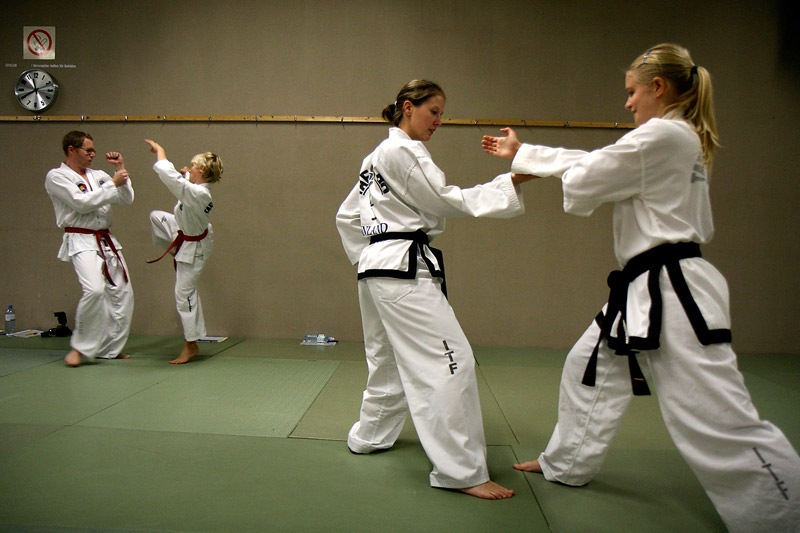 Have you ever found yourself wondering why step sparring exists? What’s the point? It’s highly formalized and like no other type of sparring that we do. It’s nothing like sport sparring or an actual self-defence scenario. A lot of people also find it dull.

But General Choi wrote a whole section of his encyclopedia on it, and everyone does it, so it must be important, right?

So what’s the purpose of step sparring in taekwon-do? To answer that question, we have to understand where it came from.

The origins of step sparring

I’ve mentioned in several articles now that taekwon-do largely grew out of Shotokan karate. So it should be no surprise that step sparring is a part of karate as well. It feels as if step sparring should be an ancient practice that goes back hundreds of years to karate’s Okinawan roots. But did you know that it was invented in the 1930s?

Yep, step sparring is not much older than taekwon-do.

The story goes that Gichin Funakoshi, the founder of Shotokan, never learned the proper applications of the movements in the karate kata (their word for patterns). So he had to make assumptions. While karate applications were likely realistic once upon a time, Funakoshi and his students (as well as karate instructors of other styles who also didn’t learn the applications) changed things. General Choi and the other founders of taekwon-do learned karate from these folks. And now we have the less realistic applications in both karate and taekwon-do that we know and love today.

In the 1930s, Gichin Funakoshi’s son, Gigo, was one of his top instructors. Gigo had also studied kendo, and wanted to incorporate some of its methods into karate. Old Okinawan martial arts had focused on “open hand attacks, short distances, joint locks, basic grappling, pressure point striking and use of the front kick and variations of it.” But Gigo didn’t know this—because his father didn’t know. Instead, Gigo tried to take the long-distance fencing of kendo and apply its concepts to a hand-to-hand martial art. So he invented step sparring and, later, the long-distance free sparring that we have today.

Take a look at some kendo drills and see if you can spot some similarities to step sparring.

So what’s the point?

It would seem that step sparring came about because of a fundamental misunderstanding of the purpose behind karate techniques. Instead of using the techniques as a means of realistic short-range fighting, Gigo Funakoshi used them as long-range techniques that aren’t that practical.

General Choi and the other pioneers of taekwon-do learned this impractical form of sparring and continued the trend—presumably because they thought that’s how martial arts are supposed to be done.

So I guess we could say that there is no point to step sparring. It doesn’t teach you how to spar. It doesn’t teach practical applications to taekwon-do techniques. It isn’t something that’s been a part of martial arts since time immemorial and that we’re just misinterpreting. Instead, it began as a misinterpretation. It was wrong from the beginning.

But maybe that’s not being fair to step sparring. After all, it is good for teaching students the “standard” applications of pattern techniques (i.e. those shown in the Encyclopedia of Taekwon-Do). It gets students accustomed to attacking and blocking. It’s a great introduction to pre-arranged sparring. And depending on how hard you want to go, it can even forge your attacking and blocking tools.

And if step sparring is modified, it could potentially become even more useful. If you learn more practical applications of pattern techniques, modified step sparring could be a way to help drill them over and over.

Also, depending on how you do your one-step sparring, you could be doing something useful already. General Choi wrote that one-step sparring was the closest to an actual self-defence situation. The way most people practice one-step sparring, this is a gross overstatement. We talk to our partners ahead of time. We know what attack will be coming and we know how we want to block it, realism be damned. When it’s well planned, it doesn’t have to be realistic. (Case in point, no one ever attacks with a lunging reverse punch in real life). But if we use realistic attacks and defences, we can slowly work our way up to dealing with more spontaneous attacks—an in, we won’t know what attack is coming. That would be hard to do, but I don’t think it’s impossible. Maybe you’re doing it already.

Or maybe we could just scrap the whole thing.

So there is a point to step sparring. In fact, there are a few. But is it important enough for you to continue to want to do it? That’s up to you.