Apparently, not everyone is on the same page.

When I was a kid, I trained at a club under the WTF. We were told that taekwon-do evolved from Korean martial arts that go back thousands of years. So when I first saw an ad for the Encyclopedia of Taekwon-Do, referring to General Choi as the “founder of taekwon-do,” I balked. “Taekwondo is older than dirt,” I said. “Where does this guy get off calling himself the founder?”

Years later, I joined a Ch’ang Hon-style club and learned my mistake.

It seems that some people—especially those under the WTF system—still believe taekwon-do is thousands of years old. But how?! Why?! How could this happen? The truth is out there for anyone who wants to bother paying attention!

Well, it turns out it’s all General Choi’s fault.

The tale of taekwon-do’s background goes something like this: Korea has a long history of martial arts such as subak and taekkyeon. Over the millennia, these martial arts evolved until we got the art we know and love today: taekwon-do.

Except that’s not true. Taekwon-do evolved from Shotokan karate in the 1940s, and slowly had some taekkyeon-inspired flavouring mixed in. So where did the myth come from?

At first, I assumed that WTF-style masters wanted to distance themselves from General Choi, and so they cobbled together a half-baked story about taekwon-do’s history. Then Alex Gillis’ book, A Killing Art: The Untold History of Tae Kwon Do, turned me onto the real story.

It all goes back to one of the first public demonstrations of the then nascent martial art of taekwon-do. In 1954 (or was that 1952? Sources disagree), Choi organized a demo for the South Korean president, Syngman Rhee (whose pen name inspired the lost pattern U-Nam). When the demo was over, Rhee asked that the new art was called. At the time, it was still known as tang soo do, which was the Korean term for karate—and, in fact, tang soo do was basically still karate back then. However, Choi didn’t want to give Rhee this name, because the president harboured a serious grudge against the Japanese. Nevertheless, someone blurted out, “It’s tang soo do.” But Rhee, who had no martial arts experience, said he knew taekkyeon when he saw it.

Choi and his right-hand man, Nam Tae-hi, knew this was a problem: taekkyeon and tang soo do were nothing alike. They felt they had to come up with a new, Korean, name for their art. And currying favour with the president would be a good move on their part.

In 1955, Choi assembled his famous group of leaders with the idea of selecting a name for the new martial art. He and Nam Tae-hi suggested “taekwon-do” because of the phonetic similarities to “taekkyeon.” In fact, their sounds are the only things the two words have in common. They’re written differently in Korean and they mean quite different things. Even General Choi’s definition of “tae” was a stretch: it doesn’t really mean to jump or kick, it means “stomp” or “trample.” But nevertheless, Choi claimed the two arts were related.

One of the businessmen in the room said that more historical research would be needed before the group could accept the link between “taekwon-do” and “taekkyeon.” (In Korean culture, historical connection was a way to show legitimacy.) The deputy Parliamentary speaker, who was at the meeting, suggested forming a subcommittee to find the historical proof they needed. 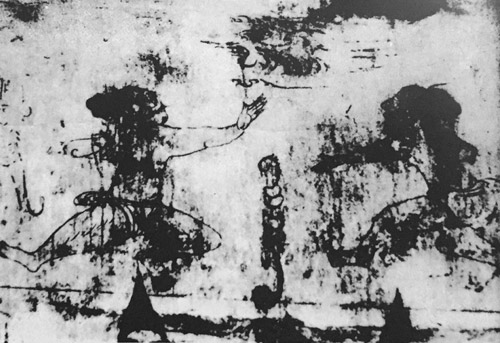 An ancient cave painting that General Choi used to justify his story about taekwon-do’s roots.

Choi came back with three specious pieces of evidence, two of which he lists in the Encyclopedia of Taekwon-Do:

The statue in question.

The links were weak at best, but Choi started claiming that taekwon-do had evolved from taekkyeon, and people believed him. He soon blended in 1,300-year-old myths about the hwarang warriors, and eventually the origin story simply became “Tae Kwon Do is an ancient, Korean martial art.” In his books, he even goes so far as to state that taekkyeon and subak were the foundations of Japanese jujutsu and karate.

The story takes on a life of its own

Not everyone accepted the name “taekwon-do” right away. For years, many Korean instructors still used “tang soo do” or other words like “kong soo do” (another Korean term for karate) or “tae soo do.” But Choi’s creation myth had taken hold.

As the years went on, Choi lost favour with the Korean government and many of the other instructors. So he was surprised to see that in the 1970s, the Korean Overseas Information Service published a book authored by Kim Un-yong—who would go on to lead the WTF—that borrowed the name “taekwondo” (without the hyphen). What wasn’t a surprise was that it also borrowed the creation myth—and wrote Choi out.

In the 1950s, that myth was used to hide taekwon-do’s karate roots. In the ‘70s, it was used to build a martial art and sport to promote South Korea’s dictatorial government.

Eventually, Choi would come to downplay his creation myth (although he never eliminated it entirely). This shift makes sense: once he became persona non grata in South Korea, he would want to emphasize his role in creating taekwon-do from the ground up. But outside of Choi’s ITF the story of taekwon-do’s ancient roots would be kept alive—a story fabricated by the very man they had rejected.