You are here: Home › Pattern Techniques › How To Do a Proper L-Stance

If walking stance is the most-used stance in Taekwon-Do, L-stance is probably second on the list. 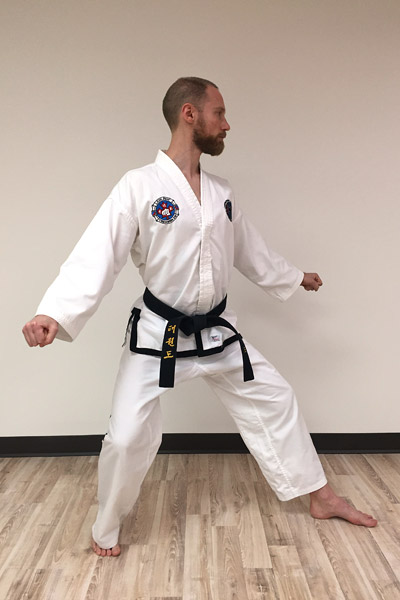 Your feet should be 1 ½ shoulder widths apart, measured from the toes of the front foot to the outside of the rear foot. Both feet should be turned inward 15 degrees and your heels should be offset by 2.5 cm (1 inch). That means that if you put a 1-inch-wide piece of tape on the floor that’s at least as long as your stance, your right heel should touch one side of the tape and your left heel should touch the other side.

Correct weight distribution is important for forming a proper L-stance. Seventy percent of your weight should be on your rear leg and thirty percent should be on the front. To get to that point, bend your rear leg until your knee makes a vertical line with your toes. Bend your front knee so the stance feels somewhat natural and so the weight distribution is properly balanced.

Push your knees apart, making a special effort to keep your rear knee turned outward slightly. Unless you’re super flexible it won’t look like it’s turned outward, but it should feel like it. If your knees are in the right place, the edge of your rear hip should form a vertical line with the inside of your knee.

Also, remember that an L-stance is always half facing.

For some students, the L-stance is the first really awkward-feeling technique that they’ll learn. Because it feel so weird, there are bound to be some mistakes. So here are some things to watch out for:

Turning your shoulders too far to the front. 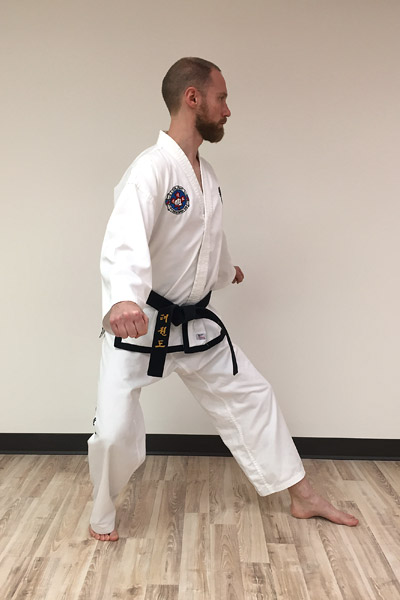 Stay half facing. Don’t turn your shoulders too far to the front. 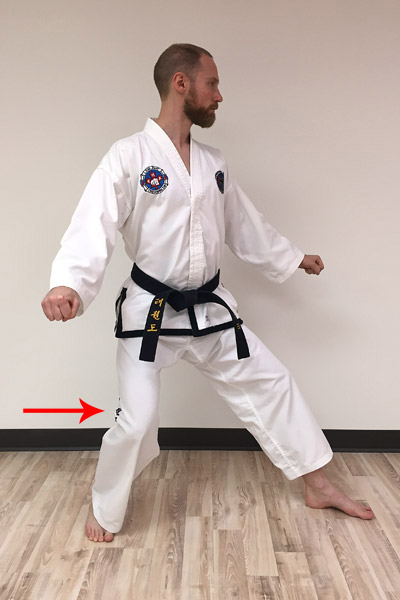 Watch your knees. Don’t let your rear knee collapse inward like this. 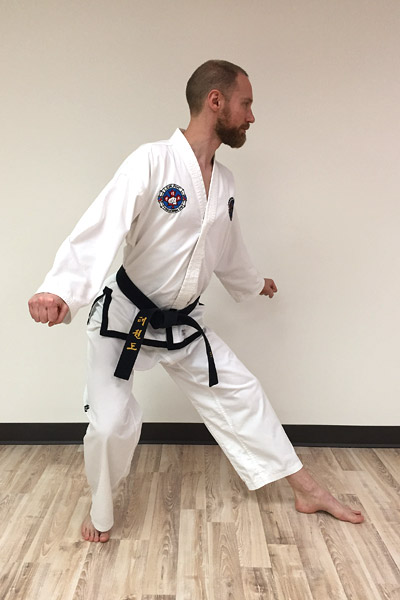 Keep your hips forward to avoid the lean.

Shifting too much weight to the front leg (it starts to look like a fixed stance).

Keep your weight on your back leg to avoid turning your L-stance into a fixed stance.

Standing too high or too low.

Standing too high or squatting too low makes your L-stance look off.

Despite the fact that it’s a beginner-level stance, the L-stance is not the easiest thing in the world to master. But that doesn’t mean that it’s hard, either. If you’re just starting out, you’ll overcome the awkwardness and get the hang of it in no time. Just make sure to practice it properly so bad habits don’t develop. This is one of those techniques that make it easy to become accustomed to bad habits that you don’t even realize you’re doing. So no matter what your belt level, keep practicing. You can never be too perfect.