You are here: Home › Self-Defence › Lessons from a Street Fight 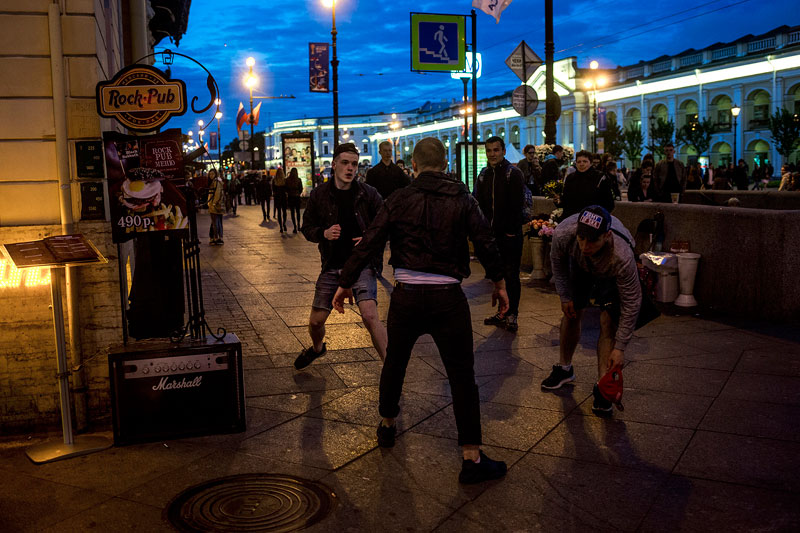 Not the fight I witnessed.

The most surreal part of seeing a man get soccer kicked in the head as he lies on the ground is the sound. It’s like slapping a half-frozen steak. That sound shouldn’t emanate from a human head.

Last weekend I watched a fight, in the street, late at night, outside a bar. Despite my nearly 20 years of martial arts experience, I haven’t witnessed a lot of violence. A few schoolyard fights, some shoving matches in bars, not much else. I’ve been jumped once—a single sucker punch—but it’s different seeing it happen to someone else.

So I watched. I wanted to see it unfold, to know, live and in person, what happens when non-martial artists fight for real.

I was walking home when three men spilled out onto the street, two of them squaring up. I suspect it was over a girl; a woman ran between them, pleading them not to fight. They acted as if she wasn’t even there.

They took their time dancing around before committing to blows. I backed up, keeping a distance to observe but not risk getting involved. I wanted to pull out my phone to get the fight on video, but wondered if the non-combatants in the group might get angry at me for filming the scene. I left my phone in my pocket.

When fists started swinging, the difference between the two men was apparent. Neither of them looked like they had martial arts training, but one had a sense of what to do. He kept his guard up high, knew not to throw his punches like a broken windmill, he threw leg kicks. He had, no doubt, watched a few UFC fights and absorbed some raw tactics.

He was in trouble.

The guy with the modest fight IQ landed some shots and his opponent wilted, falling to the ground. He wasn’t knocked out. I know the feeling: getting hit sucks, and sometimes your body needs a way to avoid more punishment. The first man, still on his feet, backed off.

The man on the ground crawled back to his feet, yelling, “No! I’m not done!”

He squared up again. The woman grabbed him. He turned to talk to her, taking his eyes off the man who was out to hurt him.

The first guy lunged, throwing all his weight into a wind-up punch that landed square on the jaw. The less-savvy fighter, still looking at the woman, didn’t see it coming. He collapsed into a heap as his brain reset.

Here’s why I wish I had the whole thing on video: the sucker punch was bad enough, but as the losing man lay unconscious on the ground, the other took a huge step toward him and kicked him in the face. Then he ran off.

I would like to have the video to show the police. As it stands, I couldn’t do a very good job of describing either man. I didn’t get a good look at their faces. I don’t think there was anyone else around.

Luckily it only took a few seconds before the downed man was able to start making his way slowly, unsteadily, back to his feet. He had to sit down again immediately, his head obviously in pain. I would be shocked if he doesn’t have a concussion.

Lessons from the fight

This wasn’t a case of self-defence. When two people square up to fight, at most they’re defending their pride. This started as a consensual fight and ended as an assault. But there are still lessons here for those of us who have no desire to fight in the street.

First, if you’re accosted by someone, you will have no idea what their level of fighting skill will be. Most people don’t know how to fight very well, but there are still degrees of skill within that group.

Second, you can’t assume an altercation is over just because there’s a break in the action. If someone wants to hurt you, they will take the easiest opportunity to do so.

Third, people can be vicious. If you get into an ugly situation, and you lose, it could be disastrous. There’s no point in trying to fight to “win” because that still leaves a risk of losing. Fight to get out of there as fast as possible. Or better yet, learn to avoid violence in the first place. You’ll be much better off.

And finally, don’t get into a consensual fight in the street. That’s just dumb.